Andy Drinkwater says that anybody looking to get insight into their website in 2023 should look at some of the more popular issues that arise in technical SEO, and make sure that you are addressing them. Andy says: “The first and most popular technical SEO issues is getting disavow and noindex the wrong way round when you’re trying to get pages deindexed from Google.”

What’s the difference between disavow and noindex?

“Disavow will prevent Google from ever reaching a particular location on your website. Whether that’s a file, folder, or image, noindex will prevent any pages from getting indexed in Google’s search results.

If you get this the wrong way around, and disavow access to a file or location first and then try to noindex it, Google won’t be able to reach the file and see the noindex tag. If you do it the other way around, make sure you put the noindex in first, and make sure that Google has seen this and the pages have been removed from the results. Then you can go ahead and disavow after that.”

What do you mean by the need to devalue pages?

“If anybody searches for their website in Google (searches for the brand name), they’ll see the site links which appear underneath the site itself. Sometimes you’ll see pages that are linked to there when you don’t want them to be. This could be an About Us page or a Contact Us page. That’s predominantly because of internal linking, which powers the majority of the site search results Google uses.

If you’re finding that these pages are turning up and you don’t want them to be there, or you’re finding it hard getting one page to rank in front of a similar type of page, you might need to devalue those pages. One of the most popular ways to do this is to look at the internal links to them. That’ll probably be the biggest issue with them.”

Should you be taking away more authoritative links (the links from your homepage and other significant pages), but keeping links from other pages on your site?

“If you want foot traffic to find its way around your site, but you’re trying hard to make one page appear over another and it’s not working, devaluing them is one of the best things you can do.”

What does linking to 404 pages mean in practice?

“With most audits, you’ll see at least a handful of pages that are linked to 404 pages. This can happen in various ways, but that doesn’t mean to say that anyone has been negligent with the site. It might be that you’ve pushed a product onto a page and you no longer have that product, so you removed it without doing the other change at the back end. You can then end up linking to a 404 page.

Google doesn’t particularly like that if there are too many. The odd one here and there is fine - and sometimes it can even be that you have external links pointing to web pages that you no longer have on there. One of the quickest things you can do is a good old 301 redirect to something similar.”

Would it be more valuable to go through these pages and ensure that the links go directly to a page and don’t involve redirects?

“Yes, that would be the ideal solution, but it depends on how many you’ve got. If it’s the odd one or two you can go back and do that, but if you’ve got thousands coming from all over the place you might have to create a redirect matrix. It depends if you can do it programmatically. There are many ways to avoid this being a huge job but a crawl will give you an idea of what pages are still live and still being linked to on a site.”

Duplicate page titles used to be an issue when CMSs didn’t allow you to apply a separate title for each page. Is that still a problem?

“You’d be surprised by how many times you see these sorts of things. With the page titles, it really depends, because Google is getting good. They are traditionally going to know which pages should be the ones that you want on the site and which you don’t.

If you’ve got too many duplicates then they’ll generally just pick one of those and show that one as well. Even if the duplicate doesn’t need a canonical in place, you’d be surprised by how many of these have duplicate page titles on sites. If you have too many then it can become a problem. It’s fairly straightforward to fix - but that doesn’t mean to say that because you’ve got a duplicate page or a very similar page on a site it doesn’t make sense to have it on there.

Sometimes it might be useful for people on the site, but you don’t want two similar pages to be indexed. In this case, you could just keep the page live and canonicalize it to the original one too. Try to achieve a best-of-both-worlds approach.”

If you’ve made the mistake of having the same page titles for two different pages with entirely different types of content, does Google now have a better chance of understanding the context of the content on your page?

“Yes. Google has done a lot recently with the rewriting of page titles. This is less of a problem now than it was a few years ago - even twelve months ago. It’s not the issue that it used to be, but if you’ve got a site with thousands of pages on it and you don’t manage them correctly, it’ll be easy to create a second page that’s similar to something that’s already on the site.

What are Open Site Searches?

“This is where you don’t disavow access to searches or search parameters within the site itself. It’s very easy to leave that open and Google will start crawling through the search on your site. This wastes an enormous amount of crawl budget, and different types of searches will give different types of issues.

You’ll find that some start appearing in the search results. For example, Google will say it’s found 100,000 pages on a site that’s got 3,000 pages - and it won’t index them and says it’s got all of these. In these sorts of circumstances, the best thing to do is noindex and get them the right way around.

Noindex your search results (the pages that you don’t want to be in Google), then disavow access to those files as well. Hopefully, that’ll prevent any of these issues from being thrown up by Google in future. It is a problem for crawl budget, which is one of the main reasons why it’s worth fixing.”

What are your general thoughts on auditing? How often should audits be carried out and what are the key things to be looking for on an ongoing basis?

“If you’ve got a site that’s active in terms of development, it’s important to keep on top of these things. For some clients, you might need to audit sites monthly to make sure that, when changes have been made, they’ve not thrown up issues – which is something that can happen an awful lot.

If the site is fairly static and doesn’t change that much, it might be that you only need to audit it once every six months or so. It’s worth keeping in mind that Google has around 1500 algorithm updates on an annual basis. Nobody knows the exact number, but definitely over a thousand. If they’re changing something and you’re not necessarily aware of it, you may want to run a fresh audit to make sure that anything current with Google is being picked up as well.

There are going to be plenty of opportunities for people to find these sorts of issues with one of the many tools out there. These can be used interchangeably, and you can use a few of them when auditing because they’ll provide different pieces of information.”

Do you attempt to define the financial value and ROI of fixing these issues?

“Yes. It’s always worthwhile if you can show the benefit of what’s being done. This can be built into whatever service you’re doing for somebody.

You can look at the site and see how often they’re making these changes. Go back over the site a few times a year on some of the smaller sites, and some of the larger sites that have big development teams. Sometimes even a month is too long, so if they’re changing something in the production area and it needs to go through staging, you can crawl it through staging before it goes live. It depends a lot on the size of your site and how active it is.”

Could you tie it back to something like forecasted ranking improvements?

“It’s great to give a forecast on where you expect something to be as a result of doing an audit on a website. Sometimes this can be a little unclear, because it is Google at the end of the day.

We don’t always know what’s going to happen, but you can always give some sort of indicator regarding what’s to be expected when you do an audit. If something new is picked up, what will be the result of that? It might not always equate to dollar value, but it will equate to what this fix means in terms of how the site will perform in Google. That in itself can be interpreted with the natural value.”

What shouldn’t SEOs be doing in 2023? What’s seductive in terms of time, but ultimately counterproductive?

“You shouldn’t be ignoring site images. Site images and site speed are always going to be on the tip of Google’s tongue. It’s about how quick you can make your site - where the quicker it is the better.

One of the quick fixes that anybody can do is to ensure you look for the latest image files going to web pages. People ignore this sort of thing but it’s a fairly quick fix - you can use Cloudflare and work through one of their systems. This will simply involve ticking a button and having them deliver a faster image for you. Don’t ignore site speed.”

Andy Drinkwater is a Freelance SEO Conultant and you can find him at andydrinkwater.com.

Choose Your Own Learning Style

If you like to get up-close with your favourite SEO experts, these one-to-one interviews might just be for you.

Watch all of our episodes, FREE, on our dedicated SEO in 2023 playlist. 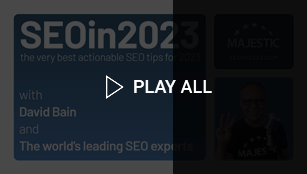 Maybe you are more of a listener than a watcher, or prefer to learn while you commute.

This is our favourite. Sometimes it's better to sit and relax with a nice book.

The best of our range of interviews is available right now as a physical copy and eBook.